Screw back or backspin arises on the cue-ball (CB) after it contacts the object (OB) and when it is hit anywhere between the center of the cue ball and the extreme bottom non miscue-able point on it. How much backspin it undergoes, depends on how much  the cue ball is hit below center along with how much power is put in the shot. The more powerful the shot, and / or the greater the angle which you have to cut, the more the cue ball will travel along the stun path before it actually starts to screw back.

Few tips to develop good backspin action are as follows:
A few things that you will notice:

The path of the cue-ball after contact after playing a successful snooker backspin shot can be analyzed as under.

You will find that for any angle except for a straight pot, the cue ball will curve, but only after a while. The distance travelled before it screws back will be directly proportional to the angle at which you have to cut.

In this case the CB will come straight towards you. You will see that, it comes exactly straight, unless you hit it on the edges of the pot to create an angle. Now, if you put some side along with the bottom, it will  travel different paths, but only after hitting the cushion. I will try to discuss that later on.

In this case the CB will travel to the opposite side of the pot at an angle close to 90 degrees to the line joining it and the OB, .

Now here you will see that the cue ball will start curving only after it has travelled some path perpendicular to the line joining the O.B and the pocket. This path is also known as stun path, and is one of the most important things to master in cue ball sports, but more on that later on. So after travelling that little stun path, the CB will start to curve at an angle of 90 degrees to the line joining the initial positions of the CB and OB. 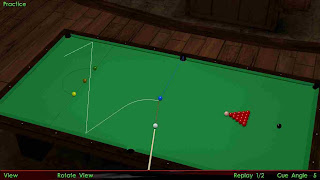 The path will be in the area between the line joining the initial positions of the CB and the OB; and the line perpendicular to it, at the opposite side of the pot. Simply put, it will screw back more for thicker hits and at less for thinner hits. Here also, the cue ball travels the stun path, more for thinner hits and higher speeds.

For example, this three quarter ball hit, with good amount of screw back, will make the cue ball travel along the path shown

4. Thin cut
In thin cuts, there will be little to no screw back on the CB. It will also take very long to start to screw back. As you go thinner, there will be a point when it will be impossible to screw back. So you see, it is always advisable to avoid thin cuts at any cost, but if you are in that situation, keep a lookout on the white as best as you can.

There are three basic types of backspin :

Try these out on the table. And always remember that with proper knowledge and practice, you will be able to do all this and more maybe without even looking.