I know of a few kinds of snooker break-offs. The position of the white at the end of the shot, anything behind the baulk is okay for starters. The first break off listed here is one which will get you started and will leave your opponent with an “OK” safety. Great for starters, as most people just try to hit the frame and then end up hitting the blue or reds nearby. You can check out the others as well if you want to master the break off shot !!!

Check out some ambitious break-offs at
http://cue-ball-control.blogspot.in/2012/08/some-more-snooker-break-offs.html

In the beginner’s break, the basic idea is to hit the top cushion (the one behind the black), then the long right cushion, and finally try to come close to the bottom cushion (the one behind the baulk colors), and preferably (at least initially) through the baulk colors. Practice this on the table for sometime. You might hit the yellow, green or brown, but don’t worry. That is good if you are learning. You will get an idea of the white ball path. Also, notice where the white ball hits the top cushion in each shot. Check out this, and other breaks in the sections below.  Power is denoted on a scale of 1-10. 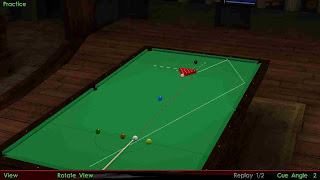 Place the cue ball between the brown and yellow, and hit
it between half and quarter ball on the red at the corner of
the pack. Initially, don’t use any english.

This is a simple break, start with this if you have just started playing snooker. Here, you will notice that no side-spin is used. I will try to make two important points for beginners. If you give right hand english, it will cause the cue ball to turn more right after it hits the first cushion (the top right cushion), and as a result hit the second cushion (the far side cushion) nearer to the corner pocket. Notice in the picture above, after hitting the second cushion, the white comes between the brown and yellow and reach the bottom cushion, behind the brown . If hit with right english, the white can very well come between the green and brown before reaching the bottom cushion, preferably behind the green. If you hit it with left hand english, you can come from the right side of yellow, and reach the bottom cushion behind it.

Contact point on CB. Notice that there
is no english at all on the CB, you can
however give a little bit of right hand
english to make the cue ball reach the
bottom cushion more easily.

Contact point on OB, here, around a
quarter ball, try different hits between
half ball  and quarter ball.

This amazing way to break is preferred by most of the professionals, of what I’ve seen.  Once you are good with the simple first break, you can move on to this one. In this break, you will notice that you have to give extreme right english to make the white ball travel behind the blue, try to miss the pocket, even hit it before the baulk line (as shown in the picture below), and eventually end up behind the green or even the brown. 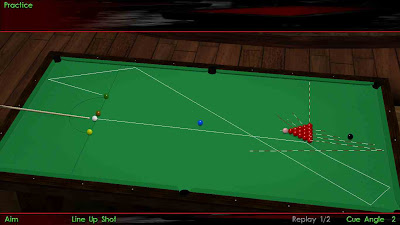 Your opponent is left with a snooker after the break-off


Even if you let the cue ball stop at the bottom cushion, you leave
your opponent with a very difficult  first red.
You can play this break off shot by striking the object ball a little thinner to ensure that only a few reds scatter. Keep in mind that you would have to give extra side spin, and maybe even initially place the cue ball as close to the brown as possible to ensure that it contacts the top cushion a little nearer to the pocket.

Check out some ambitious break-offs at
http://cue-ball-control.blogspot.in/2012/08/some-more-snooker-break-offs.html